Where is The Paramount Theater located? 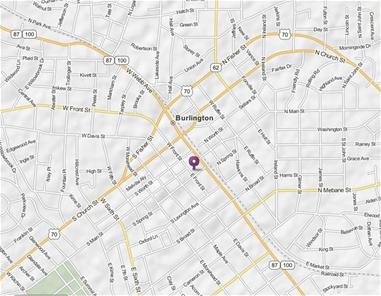 What is the history of The Paramount Theater?

Originally opened in 1928 by J.R. Qualls as the Grand Theatre, the theater's first show was "Three Weekends" starring actress, Clara Bow. Admission at the time was 10 and 35 cents! One year later, Qualls changes the name of the theater to The Paramount. Though the theater thrived during the Depression and World War II, the 1960s and 70s brought hard times for the theater. The Paramount Theater was scheduled to be demolished, but managed to survive. The Gallery Players stepped up to try and make The Paramount stage a permanent home of community theater for Burlington. In 1993, the City of Burlington and the Alamance County Arts Council took on the task of renovating the space. Now, The Paramount Theater is celebrating its 15th anniversary under the direction of David Wright and a supportive network of patrons from Alamance County and beyond.

Where can I park when coming to the Theater?

Click here for a map of available downtown parking.


Is the Theater handicap accessible?

Yes, The Paramount Theater can meet the needs of handicap patrons. Please contact The Theater at least one day prior to the show to request special accommodations.


Can tickets be purchased online?

Yes. Links can be found on our ticket reservations page..


What happens if The Paramount makes an error in your reservation?

We will first make sure we meet your needs by finding you an alternate seat for the performance. We will get your contact information and make available to you a number of tickets, equal to your reservation, for any event at The Paramount in the next twelve months.


Does the Theater offer season tickets?


What concessions does the Theater offer? Is food and drink allowed in the Theater?

The Paramount provides soft drinks and wine for sale to patrons during the intermissions of our events. Other user groups may offer a wider variety of concessions. However, under no circumstances are food or drink to be taken into the auditorium and/or balcony. Alcoholic beverages are not allowed outside the concession, lobby and mezzanine areas.


What is the refund policy due to inclement weather?

The opportunity to reschedule is open due to availability. In no case will a refund be issued.