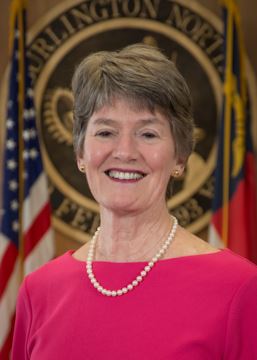 Kathy Hykes was appointed by the Burlington City Council to fulfill the unexpired term of Mr. David Huffman who resigned in October 2014 to accept the position of City Attorney. Ms. Hykes was elected in 2015 to a term and was appointed Mayor Pro Tem on January 2, 2018.
Mayor Pro Tem Hykes has devoted her life to community service and improving the lives of others. In addition to having previously served on the Burlington City Council between 1981 and 1985, she has also held numerous civic leadership positions with organizations such as: the NC Advisory Council on Head Start, the Burlington City Board of Education, The Foundation Serving Alamance, the Alamance County United Way, and the Alamance County Human-Relations Commission. She assisted in founding the Diversity Institute of Bermuda, the Alamance Coalition on Adolescent Pregnancy, and the Rape Crisis Alliance (now, Crossroads Sexual Assault Response and Resource Center).

She holds a Bachelor of Science from Drexel University as well as Certificates in Early Childhood Leadership Development, Diversity Facilitation, Facilitation, and Education for Ministry.

Of her appointment, Mrs. Hykes says “I am most interested in Burlington being a very livable, attractive city with opportunities for all of its citizens, especially employment, recreation, education, and culture.” She adds, “During my appointment, I hope to add what I can to the discussion regarding the updating of our Unified Development Ordinance.”

Mayor Pro Tem Hykes currently serves as the chair of the Newlin School Partnership and as a mentor and facilitator of Education for Ministry. She has three children with her husband, Bob Hykes (d. 2019) and is grandmother to six.
[]