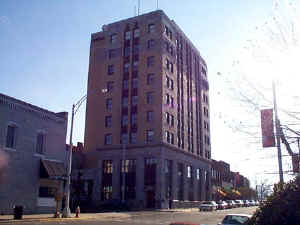 Atlantic Bank and Trust Company Building
"The (former) Atlantic Bank and Trust Company Building, constructed in 1928 to 1929, is the most prominent feature in the skyline of downtown Burlington, NC. As the city's only true skyscraper, the nine-story building is visible from any approach to the business district. Coupled with its height, the building's Art Deco style--highlighted with fanciful passages yet dignified in its overall effect--stands as the hallmark of both the city center and the period of prosperity that produced it."

"The exterior of the steel-framed (former) Atlantic Bank and Trust Company Building is remarkably intact. Its design is characterized by the rational organization of the design, a variety of materials, and a profusion of low-relief ornamentation."

"As the most distinctive feature of the city's skyline, it represents the pinnacle of pride, optimism, and success which characterized Burlington in the 1920s and produces ambitious building effort citywide. Related through mergers and acquisitions, the three banks that have been the building's owner and major tenant for most of its history all have played leading roles in the local economy. The elegant Art Deco design of the building was executed by Charles C. Hartmann of Greensboro, one of North Carolina's foremost architects."