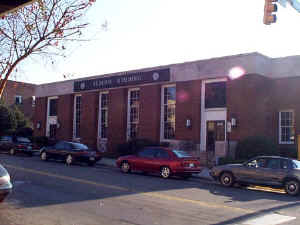 (Former) United States Post Office
"The (former) United States Post Office in Burlington, NC, constructed in 1936, with significant murals illustrating local history completed in 1940, is eligible for the National Register…It is significant as the first tangible federal government presence in the city. The structure is associated with the upsurge in public-building construction by the federal government following the Public Buildings Act of 1926, and especially with the Depression-era public works projects of the 1930s.

Furthermore, this carefully composed building, exhibiting a blend of the Classical Revival and Moderne styles, is distinguished by its notable interior wall murals. Designed by Southern artist Arthur L. Bairnsfather, these murals treat the railroad—Burlington’s reason for existence—and the textile mill—the backbone of its economy—while being rare examples of this form of artwork in North Carolina."